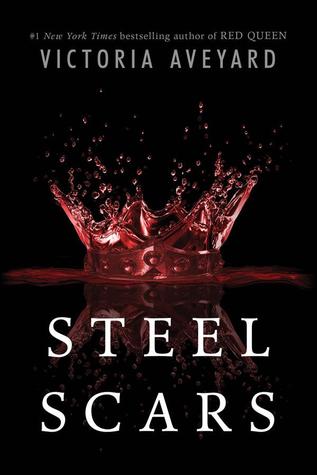 In this digital prequel novella set in the Red Queen world, Captain Farley exchanges coded transmissions with the resistance as she travels the land recruiting black market traders, smugglers, and extremists for her first attempt at an attack on the capital. She was raised to be strong, but planting the seeds of rebellion in Norta is a tougher job than expected—until she stumbles upon a connection that may prove to be the key to the entire operation: Mare Barrow.

In this prequel novella to RED QUEEN, STEEL SCARS tells the story of Farley, a secondary character from RQ & a captain of the Scarlet Guard – a group rebelling against the Silvers in power. I absolutely loved this book! Farley is a fantastic character and I wouldn’t mind reading a full-length novel in her POV. I also wouldn’t have minded if RQ had been told in Farley’s POV instead of Mare’s. Obviously it wouldn’t have been called RQ, but it’d be way more entertaining (to me).

I think I like Farley a bit more than Mare because she isn’t a special snowflake. She’s worked very hard to get where she is and her strength is human. I don’t mind characters who end being a special snowflake – I mean, who doesn’t imagine themselves as heir to the throne or having magic powers or finally getting their Hogwarts letter. However, I don’t always like it when everything about the protagonist is self-made, human strength and then suddenly we find out they’re a special snowflake & everything that made them human is left in the dust. It’s easier to identify with a character if their strength seems somewhat realistic & obtainable to us.

I also loved the behind the scenes feel we got from this. Reading decoded messages sent to and from Farley was great (although sometimes hard to read). Overall, it was really exciting! We also saw a bit of Shade Barrow, Mare’s brother and I loved the chemistry between him and Farley. Another reason why a full-length novel in Farley’s POV would have been great.

Something I did dislike about the novella, it was one big book, no parts or chapters to separate it. It made it hard to decide when and where would be a good place to pause. Sure, I can bookmark it at the beginning of the page but it seemed like pausing in the middle of the action.

I find you don’t need to read Queen Song to read this but you should read Red Queen beforehand – you’ll understand things a bit more.

Queen Coriane, first wife of King Tiberias, keeps a secret diary—how else can she ensure that no one at the palace will use her thoughts against her? Coriane recounts her heady courtship with the crown prince, the birth of a new prince, Cal, and the potentially deadly challenges that lay ahead for her in royal life.

Victoria Aveyard’s writing is superb in this prequel novella to Red Queen. Queen Song tells the backstory of Queen Coriane, from her life before the Royal Court to her friendship with the crown prince as well as the heartache and despair that comes with being a Silver daughter. Although the writing was strong, the main character was not.

I think Coriane’s personality didn’t fully get across to me and her troubles came across as a pity party. She seemed like she’d make a great mechanic or engineer and a big reader, but she doesn’t really fight for those things. As well, she talks about these things, but we don’t really see her doing them. It should be show, don’t tell. She also observes and thinks about the Reds and the Silvers. I did like that and I felt like she could’ve made strong strides as the Queen. She acknowledges that the Reds have it so much worse than the Silvers, but the focus remains on what the Silvers can’t do (like fight cancer or death). The irony is that she’s told multiple times to get a backbone and is written as weak and underwhelming.

I read Red Queen over a year ago so I don’t remember every skill/talent that the Silver houses are known for, never mind remember what a Singer can do. I wish the author had mentioned Coriane’s ability earlier (rather than near the end) and maybe explained it a bit more. I was actually starting to think Coriane didn’t even have one. Elara’s ability was mentioned earlier and in greater detail.

Maybe my main issue was that, I the reader know the fate of this character, having read Red Queen and wished for a character who fights up until the last moment, despite their fate. Coriane did act but it didn’t feel significant. It seemed to place her deeper into the hole. If you liked the Red Queen series or want to read about the backstory of this character, this is a quick read – just don’t expect a great YA heroine.