The final round for the 2016 Goodreads Choice Awards has begun! If you remember, I posted about my favourite books and authors that made it into the semifinal round here. Some of them made it and others didn’t, so I’m sharing that below. Voting ends November 27, 2016.

Do Not Say We Have Nothing by Madeleine Thien didn’t make it to the final round, I’m a bit sad about that. These four did and I think I’m voting for Homegoing by Yaa Gyasi. All sound good though.

A Gathering of Shadows by V.E. Schwab made it to the final round! I’m so happy about that, I hope you all vote for it. Or if you haven’t read it, add it to your TBR along with the first book A Darker Shade of Magic.

The Princess Saves Herself in this One by Amanda Lovelace made it to the final round! I haven’t read it, but have only heard good things.

Three of the four books I was rooting for made it! I’m sad The Reader by Traci Chee didn’t make it, but am super glad about the other three. I’ve been really rooting for The Girl from Everywhere, so I hope you vote for that one, or at least add it to your TBR.

The Female of the Species by Mindy McGinnis didn’t make it this round, but I knew it’d be tough – a lot of great books were selected. I’m also sharing a book I didn’t mention last time: A Study in Charlotte by Brittany Cavallaro. This is a Sherlock Holmes retelling set in present day. The main character, Charlotte is actually the great-great-great-granddaughter of Sherlock. I haven’t had the chance to read it, but it sounds really entertaining.

My Lady Jane and Ivory & Bone didn’t make it 😦 This category is basically overrun by super popular or overhyped books. I knew ACOMAF would still be in the running and I’m voting for it this time. It is my favourite book of 2016 – yes, the year isn’t over but I doubt any other book will top it.

Thanks for reading and please vote here! Did any of your favourites make it to the final round?

The semifinal round for the Goodreads Choice Awards 2016 has started and I just wanted to take this moment to write about and highlight some favourites. Obviously you can only vote for one, but I hope you find some new reads. I’m only sharing the categories and books I’m interested in, but make sure you check out all 20 categories and vote here. Voting ends in three days (November 13).

I haven’t read any of these but have heard good things so they’re all on my TBR shelf.

A Darker Shade of Magic by V.E. Schwab is one of my favourite novels so I couldn’t not vote for its sequel A Gathering of Shadows. City of Blades and Cursed Child are also on my TBR shelf.

I haven’t read The Princess Saves Herself in this One by Amanda Lovelace but have heard so many good things about it. I’m a huge fan of the author’s book blog.

There’s a lot more good books in this category but I couldn’t fit them all, so I’m highlighting the ones I really, really want to read. I voted for The Female of the Species, in case you were wondering hint hint 😉

So this category has a lot of good books and a lot of NYT Bestselling, big name authors. I’m really proud of Julie Eshbaugh, her debut Ivory and Bone made it among authors like Sarah J. Maas, Leigh Bardugo and Victoria Aveyard. I was talking to Jodi Meadows on twitter, the author of My Lady Jane and The Orphan Queen (really good duology!) and she was really surprised to see My Lady Jane had made it into the semifinals. Even though ACOMAF was technically my favourite book, I decided to vote for My Lady Jane because I knew a lot of people would be voting for SJM.

I’d love to hear what books you voted for or if any of your favourite books made it to this round.

Rebel of the Sands

She’s more gunpowder than girl—and the fate of the desert lies in her hands.

Mortals rule the desert nation of Miraji, but mystical beasts still roam the wild and barren wastes, and rumor has it that somewhere, djinni still practice their magic. But there’s nothing mystical or magical about Dustwalk, the dead-end town that Amani can’t wait to escape from.

Destined to wind up “wed or dead,” Amani’s counting on her sharpshooting skills to get her out of Dustwalk. When she meets Jin, a mysterious and devastatingly handsome foreigner, in a shooting contest, she figures he’s the perfect escape route. But in all her years spent dreaming of leaving home, she never imagined she’d gallop away on a mythical horse, fleeing the murderous Sultan’s army, with a fugitive who’s wanted for treason. And she’d never have predicted she’d fall in love with him… or that he’d help her unlock the powerful truth of who she really is.

Rebel of the Sands by Alwyn Hamilton is a gorgeous, gorgeous book! I’m in awe of how beautiful the writing is. Not only does Hamilton create a world I’d love to live in, but she also creates a protagonist who I’d love to be friends with, who I might aspire to be like & who I wouldn’t mind being enemies with because I know that battle would be phenomenal. I strongly recommend everyone read this, it’s not a book I’ll be forgetting anytime soon.

The world building was my absolute favourite. I loved the legends and stories Hamilton would weave into her world. They were so enchanting; I really need some kind of legends/mythology book that lists them all. Hamilton combines two very different cultures and I wasn’t sure how that’d work, but it actually goes really well. Although the first couple chapters only seemed to have a Wild West feel, once I got into the novel, the combination was quite flawless. There are high-speed train heists and djinni and ghouls!

Amani has to be one of my favourite protagonists of all time. I liked her, but I also liked that she’s not completely likeable (if that makes sense haha). Reading this, I got a “The Mummy” feel from it. Jin was also a fantastic and very swoon-worthy character. The chemistry between the two was like this slow-burning romance – exactly like the desert. I loved that the romance wasn’t immediate – the two are strangers in the desert, and both have their secrets.

One of the only things that I was confused about was the geography of the world. I was a little unsure of which countries were against which and which countries had a part to play in the war. I think a map would have helped as I’m more of a visual person, but I know no map isn’t the fault of the author.

Another thing I loved was the reveals! Jin being a bit of a stranger, I was so focused on trying to figure out who he was that when Hamilton revealed some things about other characters I was totally and completely surprised. I did end up being half-right when it came to figuring out who Jin really was. One of these reveals was really interesting and opens up a thousand possibilities! I’m excited about that.

Rebel of the Sands is one of my favourite debuts of 2016 and I expect a lot of good things from Alwyn Hamilton in the future. I’m still not over the gorgeousness of this book! Be sure to check this one out as well as it’s sequel Traitor to the Throne, coming in 2017. 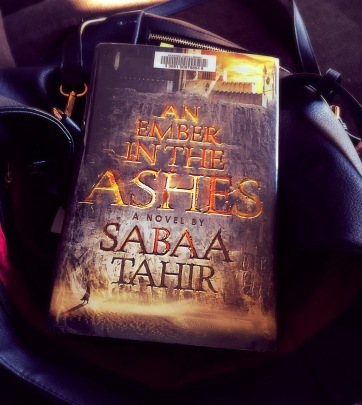 I started going into April thinking I’d only read three books, which made me a bit sad, but I actually read five so yay for that! It’s almost like randomly finding money you forgot you had. I’d ended up reading three books in February, so it’s progress. I’m aiming for ten books this month and I’m really confident about that because I’ll have a lot more free time.

Here are the books I read:

A Thousand Nights by E.K. Johnston

An Ember in the Ashes by Sabaa Tahir

The Impostor Queen by Sarah Fine

A Thousand Nights was my favourite March read; the author presents an interesting twist on the original story, A Thousand and One Nights. Albeit confusing at first, the lack of names gives a sense of mystery. The ending is absolutely beautiful and I would definitely recommend! You can read my full review of this and the other books I read using the above links.

I had the chance to interview Kate (E.K.) Johnston this month on the blog

My favourite March moment: meeting Alison Goodman, Sabaa Tahir, Rachel Hawkins, Alwyn Hamilton and April Genevieve Tucholke at the Penguin Teen Tour. Honestly, I couldn’t believe my eyes when I saw they’d be stopping in Toronto. Meeting Alison, the author of one of my favourite series of all time, Eon was phenomenal! Alwyn is also super nice and I’m loving Rebel of the Sands so far.

How did everyone do with their reading goals? Will you be participating in ARC April?